This isn’t a typical Mia The Reader post, but unfortunately, how to handle those pesky stomach bugs in small children is what’s on my brain these days. This post will be part of the Works for Me Wednesday link up over at Giving Up On Perfect. If you’re not in this phase of life, maybe skip this post and come back next time? Or stick around, you might learn something new. But don’t say I didn’t warn you…

I remember so clearly the first time one of my kids came down with the dreaded stomach bug. She was 18 months old and woke up crying in the night an hour after I put her down for the night. I had no idea what was wrong with her. I sat down in the rocking chair to rock her back to sleep, but you can guess how that worked out. A few rocks later, we were both a mess. In that moment, even as you’re grossed out that you’re covered in your kid’s vomit, it’s hurts your heart to see the panic in your child’s eyes when he or she first experiences this dismal fact of life: everyone upchucks once in a while. Most kids first learn experience this around 12-18 months. It’s no fun to be the sick kid, but it’s also no fun to be the sick kid’s parents. It’s even worse for everyone involved when the parent of the sick kid does everything wrong. Yes, that was me the first time I was the mom of a vomiting child.  Three kids and nearly six years later, I’ve learned a good bit about how to deal with the abominable stomach bug in toddlers and preschoolers. When your child starts clutching at his middle and groaning, grab these three things: mixing bowls, beach towels, and wet wash cloths.

Step One: Grab a mixing bowl. One of the worst things about taking care of a toddler when he has a stomach bug is his complete inability to get himself to a safe place to throw up. Newsflash: he’s not going to run to the bathroom. It also doesn’t work to ask your small ones to use a bucket when they feel the urge to throw up, according to the data that you can view it now. Little kids cannot handle a bucket for throwing up in. They need something lightweight that can sit right next to them on the bed or couch to quickly grab. They also need something that’s not too tall for them to bend over from a sitting position.  You need something that you can completely sanitize in the dishwasher when this is all over. Mixing bowls are your best friends.

Step Two: Get out your beach towels. Beach towels will save your sanity when your house is struck with a middle-of-the-night throw up fest.  I don’t know about you, but there is a very limited sheet selection at our house. Once I remove the initial destroyed 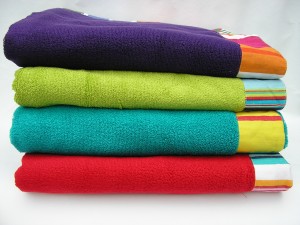 bedding, I put down a beach towel instead of a sheet on my child’s mattress. Wrapping a bath towel around the pillow is also a good idea. Then I can save the clean set of sheets for when poor little guy or girl’s stomach settles down and she’s ready to get some sleep. I’d still recommend getting those yucky sheets washed right away, but at least this way if you are (miraculously) able to get some sleep, you don’t have to worry about switching clothes from washer to dryer until morning.

Step Three: Keep a cool, wet washcloth handy at all times.  You know that point after your child has gotten out what needs to be gotten out and the heaving commences? (This is so fun to read about, I know. But I warned you!). To stop the heaving, wipe the back of your child’s neck with a cool washcloth. It’s also nice to have around to wipe the whole face down before lying back down in bed.

1. Don’t give them a bath right away. I get it. Your child smells horrible, looks horrible, is outwardly quite horrible. My immediate reaction after my daughter’s first throwing up ever was to stick her in the bathtub and clean her up. But it’s always best to wait (if you can) until you’re sure the throwing up is done. You can cross your fingers and hope it’s a “one and done” deal, but it’s probably not. (Sorry). Your child is only going to get messier because most toddlers don’t understand the whole “throw up in the bucket” idea. Also, they are probably experiencing a mix of nausea and chills that makes taking a bath an unpleasant experience for them. Clean them up quickly with a wet cloth or wipe and let them lie back down and get whatever rest they can before they’re at it again.

2. Don’t turn on the TV. A movie or TV show is another thing your child may beg for in between bouts of nausea. But the eye movement required to watch TV could very well end up increasing the nausea instead of distracting from it. We are big fans of recorded books and stories during the stomach bug episodes.

3. Don’t leave your child’s side. I don’t even try to get back in my own bed at night if my kids are throwing up. In my opinion, it’s far better for me to lay on the floor next to their beds and be able to shove a mixing bowl in their faces as soon as they need one than to run from my room when I hear them gagging only to get there when everything within five feet is completely obliterated. I’ll take the crick in the neck over the laundry/carpet/sorry-about-your-favorite-doll any day. If it’s a daytime illness (which it hardly ever is for us!), I just forget about productivity that day and keep as close as possible to the sicky.

4. Do not give your child water right away. Yes, you’re worried about dehydration. But worry about that later. These stomach bugs want everything out of your kid’s stomach, and they want it to stay out for a while. Don’t ask me why, but that’s the way it is. I am aware that medical websites say you should give children who are vomiting small amounts of liquid to drink. So that’s my official advice: do what doctors tell you to do. But my experiential, mom advice is  this: don’t give them anything while they’re throwing up. I’d love to know what other mom’s experiences are with that. In my experience, I have to let my kids throw up until there’s nothing left, and usually let them take a good nap before we start rehydrating. This is based on a normal stomach bug, though, not one that lasts more than a few hours. I’ve never seen my children get to the point of dehydration during a stomach bug when those scary symptoms you’re told to watch out for appear. Like I said, my unofficial, experiential advice is to let them get it all out and rest a bit before plying them with Gatorade or other electrolyte replacement drinks. But that leads me to this:

5. Don’t assume kids are all alike: take notes on how your children recover. If you’re like me, you’ll probably read a bunch of websites about how to help your child recover. Sadly, the advice you read might be all wrong for you. A few weeks ago, my 3-year-old son threw up every ten minutes for five hours overnight, then woke up, downed a piece of toast, and went about his normal, super hero action packed day. My 5-year-old daughter had a less intense version of that stomach bug that same night, and she ate nothing but Saltines for the next 24 hours and lazed around the house all day. Apparently, her physical and mental recovery after a stomach bug hits her is a bit more delicate than my son’s. Even after my daughter is asking for Gatorade and hasn’t thrown up in an hour or two, there’s a good chance it’s coming back up. I go ahead and give her fluids as soon as she starts asking for them, but I keep the mixing bowl nearby. This is the kid who after her first stomach bug as a toddler threw up ever day as if by habit for the next week-and-a-half at dinner. Fun times. But I now I know this…

6. Don’t give a toddler whatever food he wants after a stomach bug. Listen. She’s barely two years old. She’s asking for ice cream. You want to give it to her, but DO NOT DO IT! A week-and-a-half, my friends. That’s how long it took me to realize the first time I parented through a stomach bug that I should be giving nothing to my sick daughter other than the good old BRAT diet: bananas, rice, applesauce, and toast. But mine is more the BRACT diet because I dole out a lot of crackers in recovery times. After I backed off on a regular diet and gave her only BRACT, she recovered completely in two days. As I mentioned in the previous “Don’t,” every child recovers differently and older children can handle returning to a regular diet sooner than children two and under. If they’re under two, I strongly suggest you go extremely slow with introducing any dairy or protein right away. Not even pancakes! (yes,that’s experience speaking). Stick to BRACT for 24-48 hours and hopefully you’ll avoid the week-and-a-half of misery this first-time-mom experienced.

So there you go, information straight from the trenches on how to deal when stomach bugs and small children collide. Here’s hoping my mistakes will keep your sane in your own hour of need. On a bookish note, our favorite sick day book is this one.

The Library Is For Everyone

One thought on “Stomach Bugs, Small Children, and How To Deal”