Tootle is a book published in 1945 that many adults hate. Yes, that’s right, some adults spend their emotions on hating a cute Little Golden Book. Okay, so I am not beyond strongly disliking certain children’s books. But I like this one. It’s about a little engine named Tootle, who shows a lot of promise to be the fast Flyer from New York to Chicago when he grows up. He has to get through engine school first, where Engineer Bill teaches him all the important things, especially staying on the rails no matter what. Tootle has a hard time learning this lesson, but learn it he does. Many reviewers on Goodreads say this book is about McCarthy-ism, or it’s about conforming to standards, or maybe it’s just bad because Tootle doesn’t get severely punished. Apparently, it can’t please anyone. I think it’s just a good story about a little engine who gets distracted from his goals and learns a lesson. If every children’s book has to be my life’s beliefs in a nutshell, I wouldn’t read children’s books. My kids love this one, my husband loves it, and I think it’s fun and adorable. So if your children like trains, read Tootle to them and don’t worry overmuch that they’ll hate nature and become a cold hearted industrialist.

We also love The Wonder Book of Trains, which follows an engine collecting different kinds of cars to make up its trains. 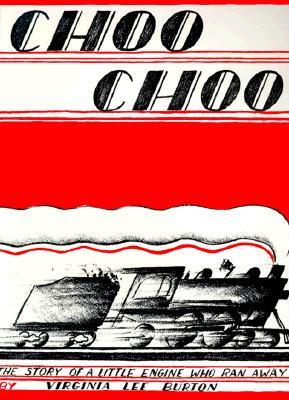 My daughter really loves Choo Choo by Virginia Lee Burton. I think the love that Choo Choo’s crew has for her is touching. It reminds me how children want to test the limits and taste adventure, but they want their parents to love them afterwards and forgive mistakes, too. Especially at age four.

I’m Taking A Trip On My Train is a fun book that replaces key words with symbols as the book goes along so that children can feel like they’re taking part in the reading. It has a nice rhythm to it, as well. My daughter started enjoying this with her Grammy at age 2 and now my son is working on following along.

I Love Trains by Philemon Sturges

This is Day 20 of the 31 Days of Picture Books series. To see the rest, go here.