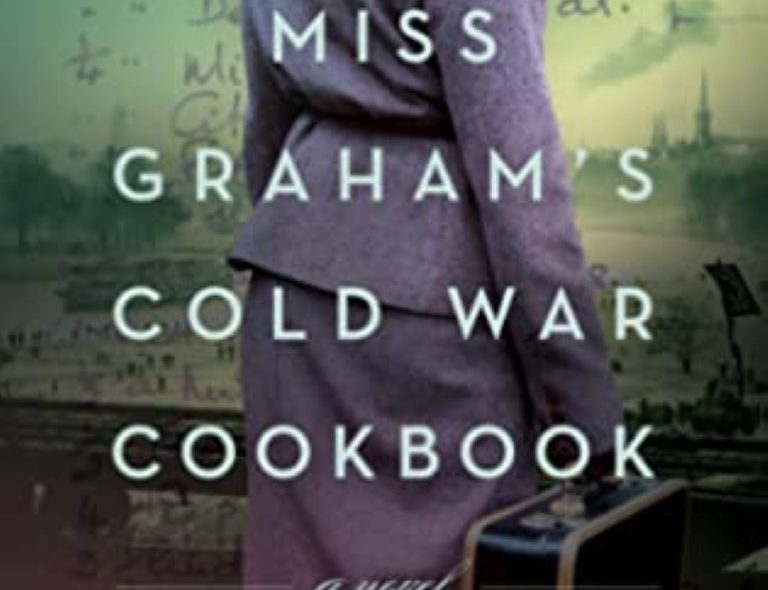 Hey friends! Time for an update on summer reading! And, a confession: I got sucked into a TV show this summer. If you know me, you know I watch TV pretty much never (sports excluded). But this summer has been weird for everyone, and I’m no exception. The strangeness of this summer in a pandemic during an uncomfortable pregnancy is probably what led me to All Espionage All The Time in my entertainment choices. I can see now that I’ve been looking for an escape from the mundane and unpleasant. Plus, sports were cancelled. So, below you’ll find what I’ve read lately, the TV show that I watched all five seasons of since May (insert horrified expression on my own face here), and what we’ve been reading in our family. Bonus at the end – the nonfiction I hope to read this fall.

Miss Graham’s Cold War Cookbook – I’m right in the middle of this one and it’s showing lots of promise! Edith Graham seems like an ordinary spinster school teacher in 1948, but when she decides to head to Germany to help rebuild the school system there, she’s recruited to use her position as a front for hunting out former Nazi officers. Her code to let the Office of Strategic Services know about her progress is her recounting of recipes. So far, I really like this book!

The Black Swan of Paris – Quite a page turner about a glittering star who flies under the radar and, mostly against her will at first, uses her talent to aid The Resistance in Paris during World War II. Perfect if you’re having trouble focusing on a book but you would love to be in the middle of one (we all have those seasons of life, don’t we?). Four stars.

My espionage reading started further back this summer with Code Name Helene, a more gritty novel than the other two featured this month but very compelling. [At the time of my review of this book, I felt the language too strong, but the writer actually explained her choice words usage at the end of the novel, and her reasoning made sense.] 3.5 stars.

The Vanishing Half – Not about espionage, though definitely about a missing person. I wouldn’t say I enjoyed it — violence, betrayal, lies, gender identity issues, substance abuse… it was all very dark and built on an already very weighty topic in a heavy time — but I read it because I wanted to dig in further to the racial strain my country is under right now and the healing we’d like to move toward. Literature helps me think through issues. 2.5 Stars.

Alias – There. I said it. I watched all five seasons of a show from twenty years ago this summer. Watching Alias started out as a way to distract myself on the treadmill, but then the plot gripped me and the Bristows and friends/enemies kept me company on the couch elevating my legs (circulation issues during pregnancy are the pits!), in the kitchen, during laundry…I had to know what happened next! All the seasons are on Amazon Prime right now, don’t say I didn’t warn you about the whole story grip thing. Also, it’s not rated G. I watched it when the kids were otherwise occupied.

The kids and I are now halfway through Mrs. Frisby and The Rats of Nimh, and it’s sloooow going. We want to know what’s going to happen to Mrs. Frisby and her family, but it’s taking so long to even find out who the rats are and we still don’t know what Nimh is! But we’re committed and should be finished in the next two weeks. Next up we’re doing either Harriet the Spy or Little Lord Fauntleroy. Votes for which I should pick?

Jeremiah is reading The Last Battle at bedtime to the whole family and wow, I have not re-read this book in forever. It’s like it’s brand new to me. All Narnia books are a delight.

What the Kids Are Reading

Isaac (9) has become a huge fan of the Redwall Series by Brian Jacques. Parents take heart – this kid wanted nothing to do with letters or numbers when he entered kindergarten! Ella (11) is loving Nancy Drew books and The Rose Legacy Series by Jessica Day George. Violet (6) and Lydia (3) want to read and re-read The Princess in Black Series by Shannon Hale, and even though the books seem so long, they’re actually very enjoyable read-alouds for one sitting. I love LeUyen Pham’s illustrations.

What My Husband’s Been Reading

Thomas Jefferson and the Tripoli Pirates – I picked this up for my husband, who is a reader without the time to browse around for books, and he liked it but thought it a bit drawn out. 3 stars.

The Call of the Wild + Free: Reclaiming Wonder in Your Child’s Education and Wild + Free Handcrafts – I’m still in the middle of these books because I am a slow nonfiction absorber, but I’m enjoying the reminders of how kids and parents can learn together in harmony and without checklists. As for the handcrafts, most of them look beyond me, but they also look so beautiful, I’m willing to try them even though I’ll probably go crazy in the process!

The Lazy Genius Way – I’m pumped to read Kendra Adachi’s first book. I’ve been a big fan of her podcast for a few years now, and if her book is as full of practical and clear headed ideas as her podcast is, it will be a winner.

That’s all for this update! What’s on your fall reading list?