A couple of weeks ago, someone mentioned in a forum about D.E. Stevenson that “if you like D.E. Stevenson, you should try M.M. Kaye.” Well, if you’ve been around this blog, you know D.E. Stevenson is my most recently discovered favorite author. Of course, I requested an M.M. Kaye book from the library. I was a bit surprised when I got it, though. M.M. Kaye wrote a variety of different books, but most of them are whodunit murder mysteries set in Africa and other foreign locales. I wasn’t sure why a person would think Stevenson’s homey, warm, character driven novels were comparable to murders on the African plains. It was as if someone told a Jane Austen fan, “Well, if you like Jane Austen, you should definitely read Agatha Christie.” But Kaye’s novels looked interesting in their own right, so I gave Death in Kenya a try. 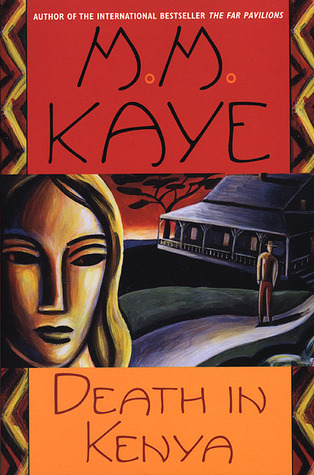 Death in Kenya is set in the 1950s, during the British colonial period in Kenya. Em DeBrett is a matriarch of the Kenyan Colonials, but she is getting frailer in her late years and her estate, Flamingo, is entrenched in a mysterious set of circumstances, culminating in a murder. She asks her niece, Victoria, to come help her with the running of the estate. Victoria comes, but does not realize how dangerous the setting has become until the very day she arrives. As the book unfolds, each character is developed and the reader can never really rule anyone out until the very end. It’s a very satisfying mystery novel. Kaye is similar to Agatha Christie in a lot of ways, but where Christie has a mastermind like Poirot or Miss Marple solve the mystery, Kaye makes the crime path unfold a bit more slowly and naturally. The “ah ha!” moment does not take quite so much explaining as it does in a Christie novel, though it does take some. Also, Kaye actually lived in Kenya for a while and the descriptions of Flamingo and the surrounding area are enthralling. I felt that set her apart a bit more from the typical murder mystery writer.

One way I could relate to the main character, Victoria, was in her desire to move somewhere warm. If I had lived in sunny, arid Kenya as a child and was moved to London as a young adult, I would be planning my getaway from that fair but chilly, damp city as soon as I came of age. Victoria was more patient than I would have been, but I completely applauded her choice once the opportunity came. The fact that this tiny bit of the book stood out the most to me should not tell you that the rest of the book is boring; it should tell you that I am really sick of winter. Aren’t we all.

I will probably pick up another Kaye mystery someday, but what is higher on my To Be Read List is her highly acclaimed novel, The Far Pavilions. At 955 pages, it may be on my list for quite some time.

What are you reading to beat the late winter blues?

One thought on “Review of M.M. Kaye’s Death in Kenya”