You are God’s greatest gift to me.

Yes, that’s a pretty big cliché. But don’t roll your eyes, because it’s true. I have an awesome husband, and I can’t take a smidgen of credit for that. 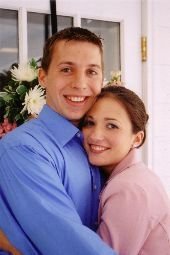 For starters, I don’t even remember meeting you. I was five. You were eight. I don’t remember our first conversation, but it probably had something to do with dividing teams to play capture the flag in your family’s back yard. I’m sure we ended up playing girls against boys. Those were probably the only conversations we had at all until I was about ten, when you decided you were absolutely bored enough to play Skip-bo with your little sister and her friend on a January vacation to your family’s mountain house. (I won). (No, really, I did. It was the highlight of my year).

In fact, we hardly talked at all until I made it to high school. We didn’t talk a lot then either, but you spent several weeks of the summer trying your best to coach a bunch of girls in our youth group to play a decent game of basketball. At the end of the summer, we were horrible, but it wasn’t your fault. And that summer of humiliation spurred us on to great things—a church basketball team and a four-year losing record. But we had a lot of fun, thanks to you and your friend being crazy enough to try to teach us something about “zone defense” and “jump shots.”

Then three years later, something must have changed because all of a sudden, we were talking all the time. It was like a sneak attack that maybe you planned or maybe you didn’t. And what did we even talk about? Email after email flew between us, until that one that made me freeze, my heart standing still as I tried to take in these words: “Is there a snowball’s chance in Hades you and I could get together someday?”

Words don’t have to be profound to change your life forever.

I stared at that email for at least a solid five minutes, hardly knowing what I was reading. I was seventeen, at the computer desk in my family’s kitchen, my parents and sisters already in bed, and those words on the screen had just uncovered the tip of an iceberg of feelings for you that had been forming, layer upon layer, for who knows how long. I didn’t write you back that night, did I? I wasn’t sure how I was going to say “yes, there’s a chance. More than a chance.” I said something more like, “Can we talk about this in person?” And then I avoided you for a week. Not exactly a promising start.

But here we are, ten years later, married with three children.  And that’s why I think of you as a gift. Because how could I have known then what I know now?

I couldn’t have known that you would be the perfect provider for me. Our journey of discovering how God wants us to use money is one of my favorite things about the last ten years. Marriage experts always talk about how women need to feel taken care of, but I think every woman will define this differently.  I didn’t know ten years ago that you would care for us so well and also encourage our family to give generously and to always pursue good stewardship of what God has blessed us with. How clearly we both knew that we needed a smaller house and a larger life has shaped our relationship for good.

I couldn’t have known you would be The Best Father In The World. Okay, I had an inkling. I saw how awesome of a big brother you were to your six brothers and sisters pretty much my whole life. But seriously? How many people go into marriage with the exact same parenting philosophy already in place? I had hardly considered what kind of parent I wanted to be, yet our parenting journey has been relatively smooth.

I couldn’t have known you would still be hot. You are.

I couldn’t have known we would still like the same things. We do. And we keep finding new fun stuff to do. Ten years ago I wouldn’t have said “I love golf.” But I do now! And you love bookstores! (Right? Right?)

I couldn’t have asked for a guy so good at being a problem solver and a sympathetic listener. I didn’t even know that’s what I needed.

I couldn’t have known you would be the strong and kind leader you are, because I had no idea what a rarity this is. It would not have occurred to me to put that on a checklist. You lead our family through the way you look to God’s Word and the examples of other strong believers. I love how proactively you think, and want to be more like you.

I couldn’t have known back when I was seventeen how crazy good you are at just plain getting things done. You pick a thing that needs doing, you make a plan, and you accomplish it. Thank goodness you’re in my life, because can you say planning is not a strong point of mine? Yes, you can.

I couldn’t have known you + me = The Most Beautiful Babies In the World. Bonus.

I couldn’t have known I chose the one who would I love more deeply with every passing year.

One can only hope when first walking into this crazy thing called marriage, but I hardly knew what to hope for. When I chose you and you chose me, we had ideas of what we were choosing, but there was so much that remained a mystery. If I had a list of husband qualifications on that day ten years ago, most of the really important stuff that matters to me now wouldn’t have even been on it. Yet here you are, ten years later, my awesome husband.

So cliché or not, I can honestly say: You are a gift. The past ten years have been nearly surreal in their beauty and happiness. The next ten years may hold hardships galore, but I look forward to the next decade no matter what because you are my husband.

Thank you for being mine.

With love beyond measure,

One thought on “Ten Years”